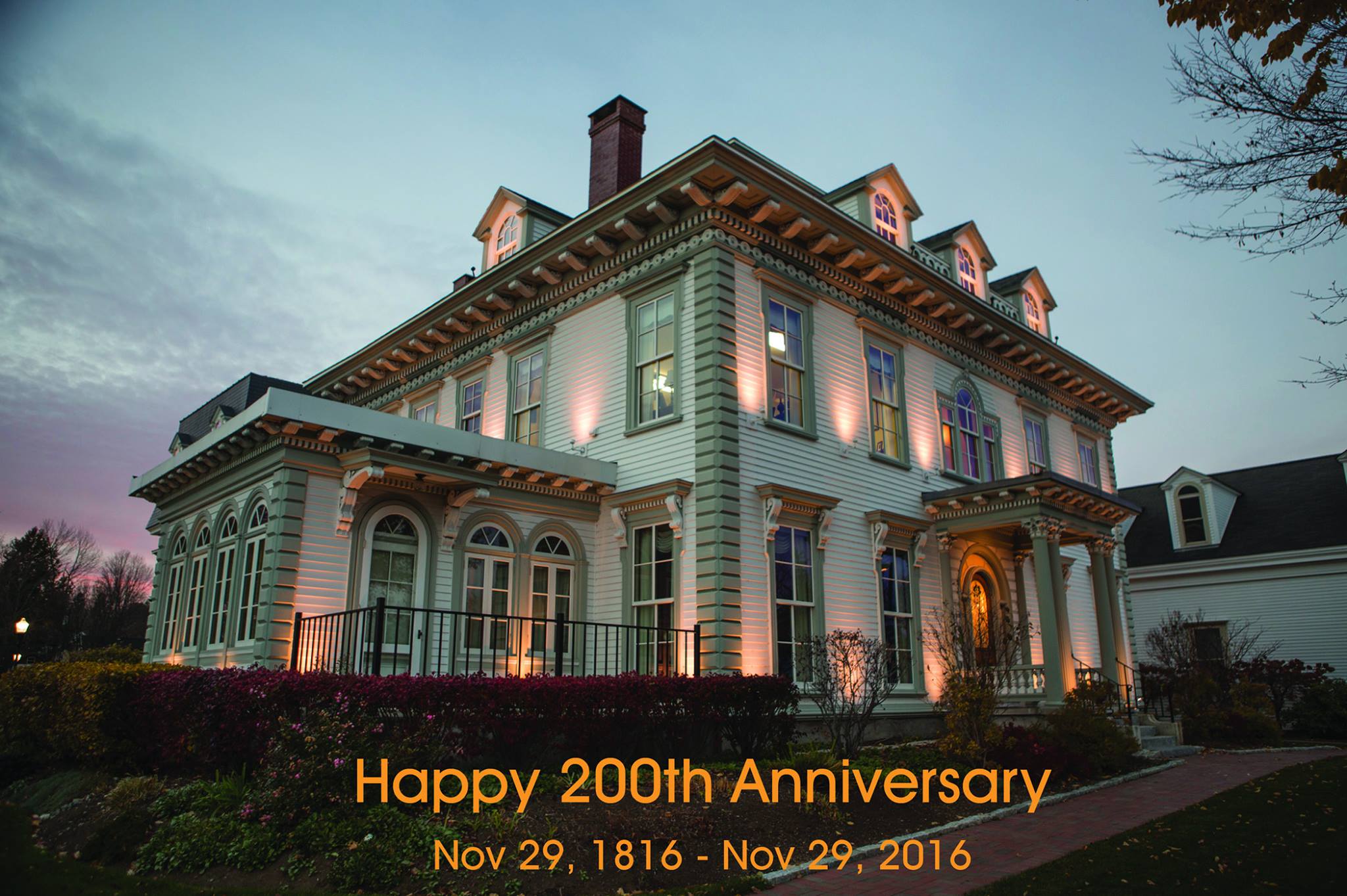 Kennebec Savings Bank strives to be a leader in community service and development. The renovation of the Tappan-Viles Mansion exemplifies the spirit of commitment by preserving one of the area's most historical and treasured residences.

Unprecedented growth in the mid-1970s to mid-1980s led to the Bank's acquisition of the Tappan-Viles Mansion (then also known as the Park Circle Building) in May of 1984. Since the completion of renovations in June of 1990, the Mansion has served as executive office space for the Bank.

The structure is a unique blend of three styles – Federal, Italianate, and Colonial Revival – which were all granted over the course of 100 years. The two-and-a-half story structure is of frame construction with hipped roof, cupola, brick internal end-chimneys, bracketed and denticulated cornices, clapboard siding, wooden quoins, and granite foundation. A one-and-a-half story ell is attached to the rear of the mansion with equivalent elaborate architecture. The most prominent styling that has been enhanced by our renovation is of the Italianate – a popular architectural style when the Bank was established in 1870.

The Tappan-Viles Mansion earned its place on the National Register of Historic Places in February 1982.

This ornate mansion was built for the Reverend Doctor Benjamin Tappan in 1816. He was born in 1788, graduated from Harvard in 1805, and studied Divinity at Bowdoin in 1809. In 1811, he was engaged as Pastor of the South Parish Church, at a time when the parish was divided on doctrinal matters. He continued as Pastor until 1849, when he resigned to work in the field of domestic missions. He continued this work until 1862, when he was thrown from a carriage and severely injured. His strength impaired, he died the following year at the age of 75.

His pastorate, covering nearly forty years, was marked by great industry in promoting the welfare and influence of his parish. He was one of the chief pillars of the Congregational Church in Maine.

Reverend Tappan favored the Federal architecture, a style that was in vogue during the period. The symmetrical distribution of the windows and the centering of the front door on the façade of the structure are the remaining Federal features.

Scenes in a Vestry

It was during Reverend Tappan's tenure that the episode of the famous Scenes in a Vestry took place.

In the early 1800s, it was customary to have square dances in the presence of the minister, with no disapproval. However, in the 1830s, qualms began to arise, and dancing to music seemed pleasure-loving and inconsistent with true piety. A committee from the South Parish was appointed to investigate, and their report frowned on such practices, as they encouraged undue love of dress, display and admiration – which, they maintained, increased unnatural aversion to the duties of religion. The Weston family did not share their views, and they were subsequently called to account, and a long and painful church trial ensued, reported by Daniel Weston in his Scenes in a Vestry, published in 1840. As a result, the Westons and others left the church.

After the death of Dr. Tappan’s widow in 1862, the property was sold to Colonel Alanson B. Farwell, who was born in Greene in 1825. Colonel Farwell was admitted to the Franklin County Bar in 1852, and was elected Clerk of Courts for Franklin County, serving from 1859 to 1861; he later served as a member of Governor Hubbard’s staff, and during the Civil War, he was Chief Clerk in the Navy Department in Washington, D.C. He was also a member of the Legislature in 1869 and 1870. Farwell died July 22, 1874, and made several sizeable bequests to various churches and colleges. His wife survived him, and gave land for Monument Park.

Colonel Farwell retained the architectural services of John C. Tibbetts, Maine's most noted architect and builder of the time, to revitalize the home and update it to its Italianate beauty. The most significant Italianate feature is the widow's walk (cupola).

Subsequently, the old mansion was acquired by Dr. W. Scott Hill, born in Greene in 1839. He studied medicine with Dr. William Graves of Sabattus, and was at Tufts College in 1863. He entered the Navy and served as surgeon’s steward until the end of the war. He graduated from Bellevue Medical College in 1867, and then came to Augusta, where he had a long and successful practice. According to Joseph T. Beck, author of Historical Notes on Augusta, Farmington, 1962... "it is said that when he was a young doctor, located in a small house on State Street, north of Bridge Street, it was his ambition to be sometime located in the house he finally occupied." In 1915, he contracted the services of John Calvin Stevens to re-style the home in the Colonial Revival style.

Dr. Hill died in 1923. The next occupant was Blaine S. Viles, Mayor of Augusta in 1915 and 1916, and a well-known lumberman. He was born in New Portland in 1879, graduated from Bowdoin College in 1903, and graduated from Yale Forestry School in 1904. He had an interest in various timberlands, was director of several area banks, and was one-time State Forestry Commissioner. The Viles family was the last family to use the mansion as a residence.

As the Park Circle Office Building, some of the occupants over the years included Viles Timberlands, Senator William Cohen, Senator George Mitchell, the United Way of Kennebec Valley, and Big Brothers Big Sisters of Kennebec Valley.

As Kennebec Savings Bank grew, it became necessary to look for additional space. In 1988, the Bank began a two-year construction and restoration project to connect the Tappan-Viles Mansion to the existing bank building. Renovations preserved designs that include intricate scrollwork mouldings and other features that highlight the historic character of the building. Treatment included significant landscaping of the grounds with shrubbery and other plantings.

Today, the property continues to serve as a tribute to the adaptive reuse of a historical structure, preserving its past and allowing it to live into the future.

About Us See More!

Notice: Because there is a risk that information transmitted via email could fall into the wrong hands, Kennebec Savings Bank suggests that confidential information, such as account numbers or social security numbers, not be transmitted via unencrypted email. Instead, please share such information through secure email, or by visiting your nearest branch.